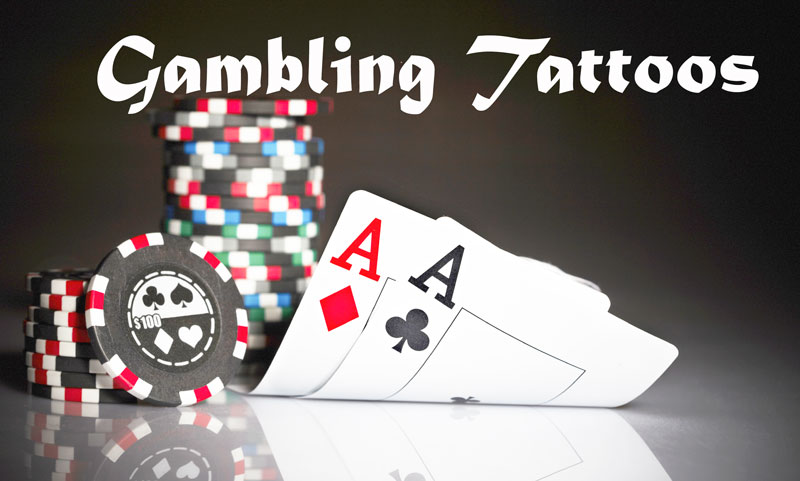 People get tattoos for various reasons, they’re more than mere fashion — A tattoo is a story, and everybody has a different one to tell.

Tattoos Are a New Form of Art

‘Your body is a canvas, and life is the artist’ — That is what most of the tattoo enthusiasts go by nowadays. Tattoos represent much more than one might believe, and the intention behind them is almost always different. Some people paint their skin with ink for sentimental reasons, and some do it to pay respects to their beloved ones who are long gone, while others do it because they are artistic. One thing is for sure — a tattoo is much more than what meets the eye.

Gamblers are very fond and proud of their profession (or hobby), so it is no surprise that they came up with so many different gambling tattoo designs. To real and online casino players, a tattoo is a statement and a way to express themselves without saying a single word. Some gamblers, on the other hand, can be superstitious; so a tattoo of two dices is a lucky charm to them. And since gambling is half strategy and half luck kind of game, can you really blame them?

Believe it or not, gambling tattoos have a longer history than you might think. They first started to appear in Japan — a country where gambling was forbidden for centuries. The notorious Yakuza clan loved to gamble illegally, and the members quickly began to transmit their passion on their skin.

On the other side of the world, Americans also have a very long history of exciting gambling tattoos. Moreover, it wasn’t only the gamblers who had these tattoos, the soldiers did it as well. Take the ace of spades as an example — it is one of the most desirable cards in many games. It was only a matter of time before people who weren’t regular gamblers started to attribute significance to it as well. Lately, it brings luck to just about anyone. You don’t necessarily need to be a casino guest to use this card as your lucky charm.

What If I Don’t Need a Lucky Charm?

Then you’re a very lucky person! All the different gambling tattoo designs don’t necessarily need to mean good luck — they can have a much broader story. To most people, the ace of spades is a symbol of good luck, but for gamblers, it means much more. A lot of players are aware of the crucial role this symbol played in the Vietnam War. For the Westerners, this symbol represents good luck; but for the Vietnamese, it signifies death and misfortune.

That’s why our troops decided to wear this symbol on their helmets to intimidate the Vietnamese soldiers — it might surprise you that this even decided the outcome of one of the battles. One0 day, you might meet a person who tattooed the ace of spades on their wrist; instead of immediately thinking this person is a gambler, consider how they might be paying respects to a veteran. That is the point of any tattoo; you never know what’s behind it.

The Importance of Symbols

Poker is not the only game people like to play — there are plenty of slots enthusiasts as well, not to mention all the traditional roulette fans. In case one game, in particular, brings you luck, why not invest your gambling money into having a tattoo with your lucky symbol?

A lot of players like to tattoo cherries on their wrist — original slot machines used fruit symbols (hence why the English still call them fruit machines), and three cherries meant that you hit the jackpot.

In Hindu mythology, Goddess Lakshmi was the ruler of wealth and prosperity. Those who worship her often play dice games, which is why having a dice tattoo is a symbol of good luck and passion for gambling.

Other players like to portray Lady Luck in a tattoo — it is usually a picture of a beautiful woman sitting among the cards and in piles of money. The Romans referred to her as Fortuna, the Goddess of fortune, and the Greeks called her Tyche.

There are so many different designs of tattoos to choose from: Joker, Eight Ball, Flaming Dice, Number Seven, etc. At the end of the day, it all comes down to whether you feel good in your skin. So if you want a tattoo, may it be a regular or a gambling one, there is no reason why you shouldn’t have it. As a passionate gambler, you will probably look amazing showing up with one in any of the casinos. You never know, Lady Luck might even grow to like you more.